Zamość, also referred to as “an ideal town”, “the Padua of the Nord” and ” the town of arcades”, is famed for its unique Old Town complex, which has been inscribed on the UNESCO World Cultural Heritage List.

ZAMOŚĆ – Historically
Zamość is an ideal town, built on an anthropomorphic plan. Hetman’s residence is the head, the Zamojska Academy and the Collegiate Church are the lungs and Grodzka Street running across the Rynek Wielki to the Lwowska Gate is the spine.
Zamość was set up by Chancellor and Great Crown Hetman Jan Zamoyski, one of the most outstanding people in 16th century Poland.

On 10 April 1580 King Stefan Batory granted the town its municipal rights and a coat of arms. Zamość was designed by an Italian architect Bernardo Morando as a modern fortress, surrounded by defensive walls with seven bastions and three entrance gates: the Lwowska, Lubelska and Szczebrzeska.

Zamość fortress withstood a siege laid by Cossack and Tatar troops during the Khmelnytsky Uprising and that of Swedish troops during the Swedish Deluge in 1656.
During the Partitions of Poland the town feel first under Austrian rule and then under Russian rule. Zamość fortress was besieged many times in the 19th century. In 1866 the fortress was demolished: the defensive walls were partly blown up and the moat was filled in with rubble.

Location of Zamość on the main trade route contributed to its rapid development. At the turn of the 16th and 17th century the town became a major economic and cultural centre.
Residents consisting of Polish, Jewish, Armenian, Greek, German, Hungarian and Scottish merchants gave the town its unique cultural and religious diversity. Next to Roman Catholics there were also Orthodox Christians, Protestants, Muslims and Jews.
In 1594 the Zamojska Academy was established as the third higher education facility in the Republic of Poland.

The town was the capital of the so-called Ordynacja Zamojska – Zamojska Entail, set up in 1589, which had its independent administrative structure, judicial system, statute, military troops and a fortress. Ordynacja Zamojska lasted till 1944.
Zamość became known as “Renaissance Pearl”, “Northern Padua” and an Ideal City. In 1992 Zamość Old Town was inscribed on the UNSECO World Cultural Heritage List.

The Old Town in Zamość includes over 200 objects of historical value. Its centre is the Rynek Wielki with the town hall, under which there is Trasa Podziemna Oficyn Ratusza, presenting its history and ancient objects obtained during archaeological excavations carried out in the 20th and 21st century. The Rynek is surrounded by picturesque town houses, with their colourful facades and a wealth of friezes, low-reliefs and ornaments. At present the Zamojskie Museum is located in the Armenian town houses.

Zamość Cathedral (the former collegiate church) belongs to the most precious architectural gems of the town. Other important buildings are a Renaissance synagogue, the former palace of the chancellor, the Franciscan church, the Redemptorists’ church (the former Russian Orthodox church) and St. Catherine’s church. In the south access to the fortress was protected by the rotunda, which during WW II was an extermination camp and which houses a museum and a cemetery of war victims at present.

The town used to be surrounded with defensive walls with seven bastions. In the largest of them – Bastion VII – there is 0.5 km Trasa Turystyczna Bastion VII – Nadszaniec with an
observation deck. 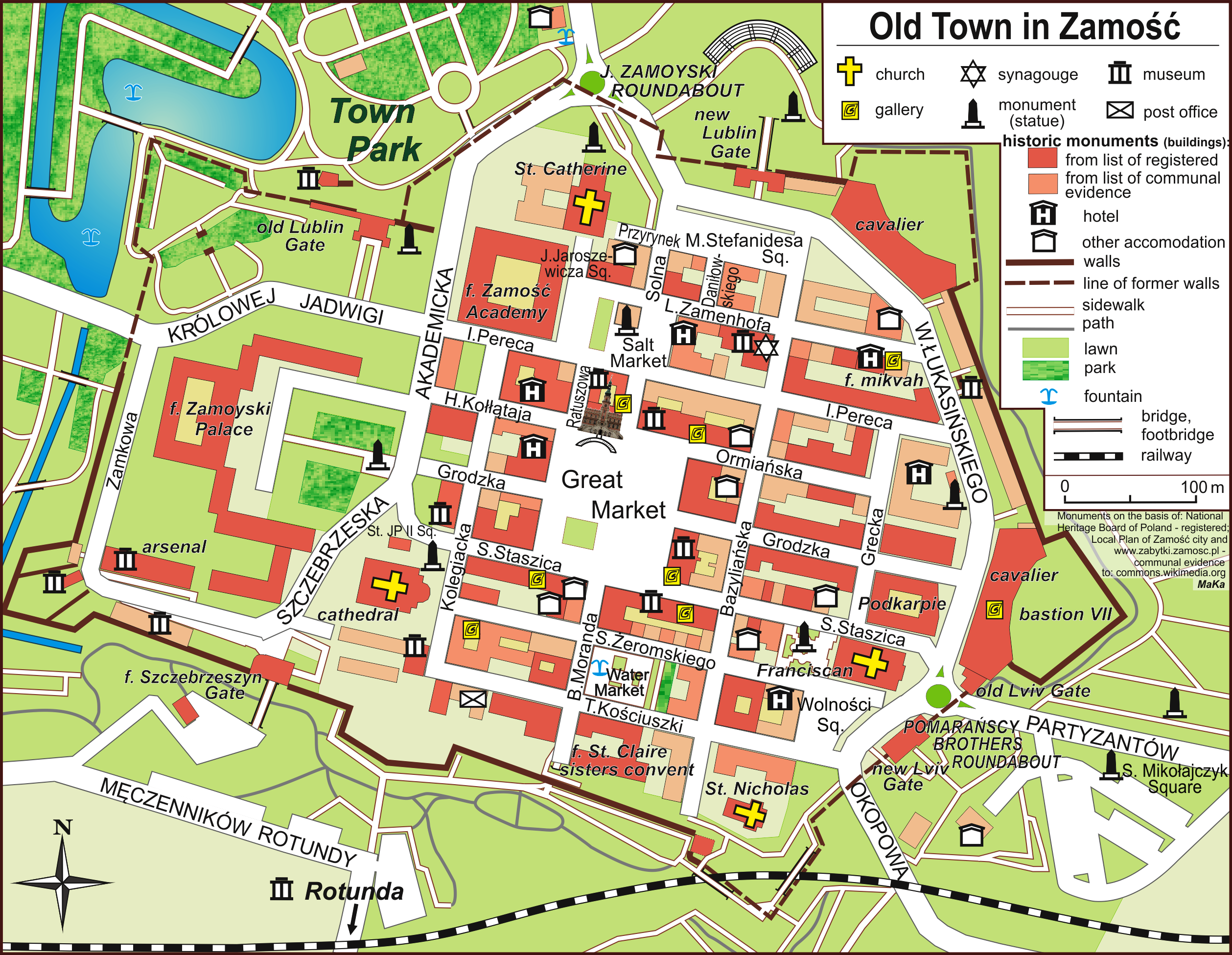 Read more about the town: